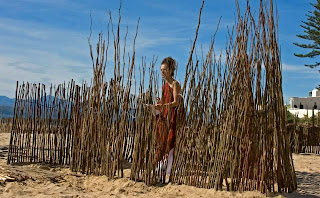 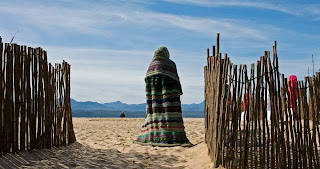 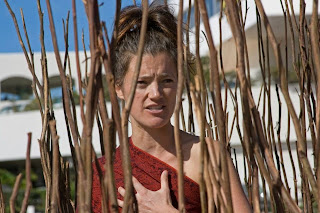 During the Site_Specific International Land Art Biennale I contributed my performance poetry to the Fences  project of artist and cultural activist Erica Lüttich. She discovered the story of Krotoa, also known as Eva, and she and her Boitumelo Sewing Project knitted a beautiful and richly colourful cloak worn by Mokhema Hlaganani, who played the part of Krotoa.
Interesting to note is that Krotoa worked in the household of Jan van Riebeeck from the age of 11. She served him for about 10 years until he left the Cape in 1662. She was the niece of Autshumao, also known as Harry die Strandloper. Seeing that she could speak several languages she was appointed as interpreter, emmisary and negotiator between the newly arrived Europeans and her own people, the Khoisan. She was related to royal Khoi family and this made her even more desirable as a pawn for Van Riebeeck. She was highly regarded as someone with great diplomatic skill and a knack for intelligence gathering, and this while still only a teenager. (She is also known as being instrumental in the emergence of the Afrikaans language).  Although she was the first Khoi woman to marry a European, Pieter van Meerhoff, and the first Khoi to be baptized as a Christian, she was always more at home with her own people. Another Khoi interpreter, Nommoa, accused her of being a traitor to the Khoi. One can only imagine the conflict of loyalty and identity she was experiencing. Toward the end of Van Riebeeck's stay in the Cape of Good Hope he started to doubt Krotoa's intentions and fidelity to his cause and believed she was passing on strategic information to her own people so as to turn them against the colonists. Because of this struggle with her identity and belonging, and possibly for other reasons she was lead to drink and other behaviours that the biased tellers of history would make us believe. The last 5 years of her young life she spent incarcerated on Robben Island.
Why her story was not known for all this while: her blood runs through some prominent white Afrikaner families.
The piece I conceived consisted of five poems  - "Fences" dealing with the Colonialist/Ownership/Safety theme and the other four poems, "Vir Krotoa", "Vir Sara Baartman" (written by Diana Ferrus), "Aan Ingrid" and "Street Woman"  inspired by women who were challenged and/or scarred by man-driven societies.
By the visionary hands of Erica, she brought Plettenberg Bay's neighbouring communities together to participate in various art projects, including the rigging up of the fences used as part of the performance. Kudos to Erica﻿ for the inspiring and heartfelt work she does!

Two years ago I wrote In die Grond en Blom skyn die hoop - a poem touching on woman's strength, her eccentricity and hopefulness. When I came across Krotoa's story, I thought back on this poem and saw how well the words fitted her. I re-wrote certain phrases and tweaked here and there for the poem to become:

Posted by lara kirsten at 11:31 No comments: 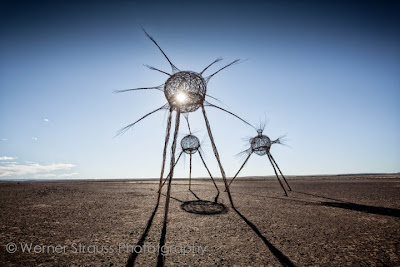 Photographer Werner Strauss has recently sent a few pictures he captured a few weeks after the AfrikaBurn festival of Kim Goodwin's wattle structures, The Earth Pods. With the photos he sent us a very moving letter expressing his gratitude for our contribution to the festival. It really touched both Kim and I to receive the words and images from Werner.

It is the first photos we have seen with clean and clear space - no tents or costumed merrymakers in the back or foreground.
Sun, shadows and textures perfectly captured.
Thank you Werner for this gift.

I have been penning down several bits of writing inspired by the Earth Pods but could not get anything off the ground. With the arrival of these photos something just clicked and the poem started to come together:

listen, they are singing with
the vocal cords
of
forsaken trees
hold them in the blink of your eye
they are treasures of the earth 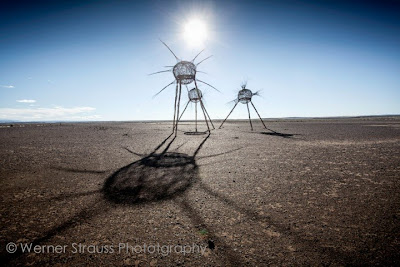 Posted by lara kirsten at 12:05 No comments:

i bite my nails with a rhythmical uncertainty
the sweat beads between my breasts
i am a refugee from the city of Word
i stumble with unmeasured steps
trip over the unevenness of the cobbled streets
i gaze back over the distance of my flight
my fate, my fate!
Word lies in ruins
my tongue petrifies to silen...

Posted by lara kirsten at 19:46 No comments: 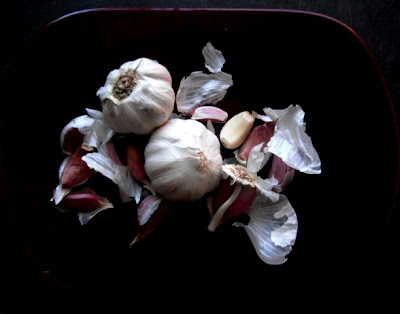 Oh Garlic, what homage
can we bring you
and your graced state
of bulbousness?
Packed tightly into
your little white dome
we want to break you open
and spread your cloves like
shining white pebbles onto
the shores of our meals.

Oh, Allium Sativum,
brother of Onion, Leek,
Chive and Shallot,
you turn my mouth
into a warm hearth.
You who have grown
rich and full in
the dark soil of the earth.
Proud should the lily be
that you are part of her family.
When we peel you
your skin breaks into
the fine wings of a white butterfly,
flitting and refusing to be taken hold of.
When we crush, bake and chew you
you suffuse the walls,
our skin, tongues and throats
with you pungency.

Your strength does not
lie in size or weaponry;
it lies in the way you smell of the sea,
of the suurbossies on the dunes
of the dark moist corners of the Tsitsikamma
and of soft, curled-up young ferns.

I grow impassioned with
the spirit of you.
With your unavoidable presence
no long-fanged demons
will walk through my doors.
If the Egyptians invocated you
at the ceremony of taking oaths
and the Greeks piled you onto cairns of stones
at the crossroads for an offering to Hecate,
then I can take a hold of you,
smear you on my forehead and temples
and beseech the poetry of you
to land upon my tongue.

As much as you try
you will never be
insipid, tasteless,
dull, boring or bland -
you hold too much excitement
and urging energy of restless underground wells.

I go to the market,
enticed by onions, potatoes,
ginger, squash,
coriander and mushrooms,
yet I am never satisfied
until you lie with your orbicular lightness
in my basket.
Stuffed in olives,
crushed onto pizzas
grilled with prawns
sliced into pickles
blended with pesto
concocted with green beans
mixed into hummus
brewed in soups
fused with pasta
alchemized with butter
and
united with olive oil -
you are herb and spice,
fruit and vegetable,
fire and lily,
gold and silver!

Hail the garlic crushers
for theirs is a divine deed.
Releasing the bulb’s bitter-sweet juices to all of the world
might just dismantle all arrogance,
melt all iciness
and
break down all pretense.
Posted by lara kirsten at 11:15 No comments:

flightlily the rhythms fly from our fingers
and we turn in a whirl of ecstatic madness
till black and white,
muscle and wood,
you and i
become one
till the dance shackles us
the melody takes us captive
and the moodiness of the cyclonic rhythm
ensnares us forever
in the exuberance of sound
Posted by lara kirsten at 15:32 No comments:

Posted by lara kirsten at 18:50 No comments: